The Rook by Steven James

Investigating a series of fires in San Diego, Special Agent Patrick Bowers is caught up in things that are more than they seem.
The Rook is the second of Steven James’s critically acclaimed Patrick Bowers Files which started with The Pawn. Many times, sequels do not live up to the expectations of the reader/viewer, and the series goes downhill from there and never picks itself back up. I am happy to say that the Patrick Bowers Files are not like this. The Rook lived up to my expectations and then some.
Steven puts Bowers right in the middle of a complex case where some things that do not seem to be linked are, where someone seems to be one person but is not. Suspense, mystery, intrigue are all mixed in to create one exciting ride.
The Rook is not a serial killer novel as with The Pawn, even though it does have a killer (plus some other villains) as deep and intriguing as the Illusionist, the antagonist of The Pawn. It is a race against time, a search for missing links between mysterious deaths, fires, and the military’s most dangerous weapon. We, along with Bowers, are faced with the challenge of keeping the facts straight, making sure we do not get caught up in things that may veer us off course.
One of the things that Steven left us hanging with at the end of The Pawn was the chemistry between Bowers and Lien-hua. There was something between them; something that we all knew would go somewhere, needed to go somewhere. And that is exactly what we get in this one. The chemistry becomes something more. The flicker becomes larger.
And of course, there is Patrick’s step daughter, Tessa. Their relationship is on the mend, but there are some things that step between them. To my delight, Tessa was even more of a prominent character in this novel than in The Pawn. She has her own story line and keeps us on the edge of our seats. Patrick will have to watch out that she doesn’t capture the readers’ heart instead of him.
Steven brings back Patrick Bowers, his coffee habits, the suspense and more that made his debut novel such a success! 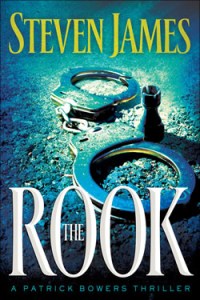