Dead of Night by Brandilyn Collins

A stealthy and cunning serial killer terrorizes the Redding, California area. Annie Kingston, a forensic artist is called on to draw the faces of the victims in hopes of identiying them. Then Annie finds the body of the Poison Killer’a aixth victim– and she won’t be the last.
The citizens of Redding are pushed to pray harder than ever before, asking God to intervene.
And while Annie is caught in the middle of all that is going on, will she be able to protect her son?
Dead of Night is the best book in the Hidden Faces series that I have read so far. Brandilyn weaves into this story all the things that we should expect in a serial killer novel while also teaching us Christians the importance of prayer.
As with the first two books in this series, most of the story is told through the first person viewpoint of Annie. Throughout the story, we follow her as she tries to protect her son Stephen from some old “friends,” comes face to face with death (something she has done way more than anyone should ever have to), makesa serious choice in her love interests, something that I have come to watching very closely, and leanrs how important it is for people to pray in time of need.
The storyline, as said earlier is something that people should expect when picking up a serial killer novel, but Brandilyn sure had something up her sleeve that makes this book unlike any other in its genre.
As one might have guessed from reading the description of the book above, there is a secondary storyline that involves Stephen, Annie’s drug-involved son– someone that I have been looking for more about. This side story makes for wonderful relationship development between mother and son.
Dead of Night is definitely one of my favorite books by Brandilyn. I definitely think that anyone who enjoys her books or enjoys a good mystery/thriller will enjoy this one. 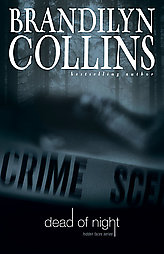 Note: I received a copy of this book from the publisher in an exchange for an honest review. All thoughts and opinions are mine.