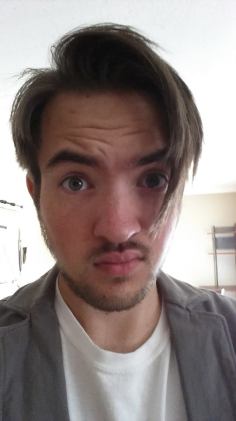 Supposedly, this is where I am supposed to talk about my hard life and literary genius, so here it is…

I was introduced to the idea of creating my own characters and worlds during fourth grade. My school had an entire week dedicated to stories, and at the end of the week, all of us were given a spiral notebook in which we could write our own stories and share them with our teacher. The idea was extremely appealing to me, so I started writing my very own mash-up of Lord of the Rings and Star Wars, complete with my own illustrations. It wasn’t very good, obviously, but I was excited.

My excitement for writing never really left me, but it wasn’t until seventh grade that I truly wanted to become an author. My English teacher had us pick a piece of art by Harris Burdick. After we had picked a picture, we were then given the year-long task of writing our very own novel based off of that picture. I chose Burdick’s “Captain Tory”. The picture was so full of potential, inviting me to create my very own character who, along with Captain Tory, could sail around and discover a whole new world of my own making. Although I did not finish it, with 15,000 words written, I was the one who had gotten the farthest into my story, and I felt quite good about that. After that year, my love for writing became an obsession.

Literature is not the only thing I have a love for, however.

Originally from the Metro-Detroit, Michigan area, I moved down to Texas at the beginning of 2014 for a two-year internship at a production studio where I write and produce dramas, promotional videos. At the beginning of 2015, I turned my attention to the world of social media. I graduated in December of 2015 and moved back to Michigan to start my own social media management business.

I mainly write fantasy but I also have a thing for many other genres such as thrillers and horror. You can keep up on my writing endeavors here.