The Pawn by Steven James

FBI agent Patrick Bowers never met a killer he couldn’t catch. Until now.
The Pawn is the first work of Steven’s that I have read. I have been wanting to get the book for more than three years as I was intrigued by the synopsis when I read it at a bookstore. Sadly, I never got to it.
After seeing that he was one of the five authors that would be at the Ragged Edge writer’s conference with Ted Dekker and hearing one of the people in my writing group say how much he loves the Steven’s books, I knew that he was worth checking out. So I got the first four books and jumped into The Pawn right away. I am happy to say that I was not disappointed at all.
The main character, Dr. Patrick Bowers is as real as a character in a novel can get. With the first person point of view, it was easy to get into his head and plant yourself there, understand the way he thinks. Of course, there needs to be a romantic aspect to this novel, and Steven delivers it with romantic tension between Patrick and Lien-hua Jiang, another special agent who does not agree with Bowers on his tactics in investigations.
This book is a serial killer novel, and is full of the twists and turns that I expect from every book in the crime genre. The killer, who calls himself the Illusionist is one of the best villains that I have read. He is always one step ahead of Bowers and Co., and leads them (and the reader) to places that they never want to go. He is cunning, twisted, and will keep the reader on the edge of their seats until the very very end… and beyond.
As said earlier, this is a serial killer novel, which means that there is violence. Steven does not back away from showing evil for what it is and many people who have read this novel have been disturbed by it. I am going to warn you that if you don’t have a strong stomach and cannot handle the way things are that they are.
The Pawn was a great novel and placed Steven right up with some of my favorite authors!
I am reading The Rook, the second book in the series, and it is great as well! Look for my review sometime this week! 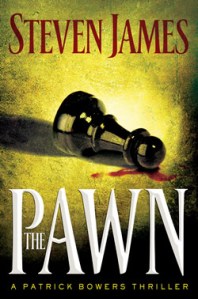