The Prophet by Micahel Koryta

Adam Austin is a bail bondsman who hasn’t talked to his brother in years. Kent Austin is the beloved coach of the local football team. Both of them are haunted by the murder of their sister years ago. Now the small town of Chambers, Ohio is shaken again when a teenage girl is brutally murdered.
With his past eight novels, the first of which being published when he was only twenty-one, Michael Koryta has garnered much critical acclaim from the best of the best in the crime/thriller genre such as Stephen King, Michael Connelly, and Lee Child. Koryta’s past three novels have contained elements of the supernatural, turning away from the crime genre which has made him popular with fans. Now with The Prophet, he has returned to crime.
This book is much different than the edge of your seat thriller. It isn’t full of chases or stalkers waiting for the characters at every turn. It does, however, keep you guessing, and there are plenty of moments that will get your heart racing, wondering if the characters are going to make good on their word, and how they could get themselves in a position worse than they already have found themselves in. The descriptions of football games and plays, unfortunately, do slow down the pace, but not to a point where the reader will find themselves wanting to skip over the pages all together.
The Prophet focuses a lot on the relationship that the brothers, Kent and Austin, have with each other as they help each other with the death of a teenage girl and with the death of their sister that they both, in someway, take the responsibility for. The many scenes where the two interact with each other are well-done and emotionally moving.
As a fan of police procedurals and FBI thrillers, The Prophet did not rise above that of authors such as Steven James or Ted Dekker, but it was a satisfactory novel that is worth a read. 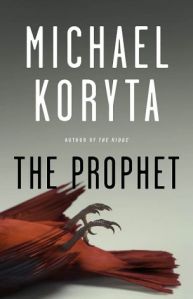 Note: I received a copy of this book in exchange for an honest review from the publisher. All thoughts and opinions are mine.