When the truth doesn’t make sense, will lies prevail?
Jay Cramer never wanted his marriage to go to ruin. His wife, Annalee, however did not seem to care. She cheated on him, falsely accused him of abusing her and their child, Jackson, kicked him out of the house, and eventually filed for a divorce. For the past year, they had only talked to each other through their attorneys. So when Jay gets an email from Annalee, asking him to come over, he thinks that finally she has decided to work things out themselves. However, that all falls apart when he sees a clown bouncing out of his old home, and finds his wife in a full bathtub, shot through the chest with his own weapon. When he calls the police, they put him as the top of the list of suspects. In fact, Jay’s story of the clown and some more incriminating evidence makes Jay the only suspect. Soon after, Jay is arrested, and Jackson is put in the custody of Annalee’s ailing mother.
Cathy Cramer is an investigative blogger who closely follows high-profile murder cases. When she receives a note that tells her that she is going to face the same judgement she pins on people on her blog, Cathy blows it off. Until she learns that her brother has been accused of murdering his wife. But Jay isn’t a killer. Cathy is certain of it. As are her two sisters and her murdered late fiance’s brother, a disgraced former homicide detective. The four begin to take matter into their own hands and pose as private investigators.
Terri Blackstock has been known for her compelling novels of mystery, suspense, and faith; with the first book in the Moonlighters Series Terri shows that her talent has not diminished. Truth Stained Lies is a solid offering consisting of a compelling mystery and suspense.
Terri has always had a knack for creating flawed characters that face hard circumstances. She continues to show that she can create three dimensional characters that readers can empathize with and relate to. Jay is the strongest character; the scene where he has to tell his son that his mother had died is quite moving.
The mystery is great, as it is with many of Terri’s novels. The reader could very well figure out who the killer is themselves, but knowing who did the deed before the reveal in no way diminishes the story. There are many and plenty of thrills to enjoy in this great novel from Terri Blackstock. 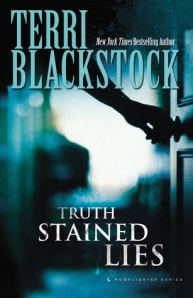