He lives in solitude beneath the city, an exile from society, which will destroy him if he is ever seen.

She dwells in seclusion, a fugitive from enemies who will do her harm if she is ever found.

Innocence is an interesting novel. I can’t really tell you to read it, but I can’t tell you not to. I guess it really depends on whether or not you like Koontz’s previous works and his love for imagery and deep prose. It isn’t an easy read, I do admit that. To be honest, I stopped reading it for about seven months, and then went back to it mostly because I was going on a trip to Los Angeles, and knowing that I was going to be on a bus for thirty hours or so, I needed something to read, and therefore decided to pick Innocence up once again with the intention of finishing it.

I must tell you why I set the book down, however. It wasn’t because it was terrible, but because it was so involved, so deep that I needed to take my time with it, and felt that a break would be a good idea to digest what I had been reading. Perhaps, if I hadn’t had so many other books that had to be read, I would have resumed reading it sooner than I did.

If you are looking for a story with  break-neck pacing like Koontz has written before, I wouldn’t suggest reading Innocence. It demands to be read slowly, the prose embraced and tasted. If you decide to pick up a copy, I would suggest that you read it over a span of a couple of weeks or more.

So, reader, I leave you now with the decision to whether read this novel. If you have read it, or do read it in the future, I would love to hear your thoughts! 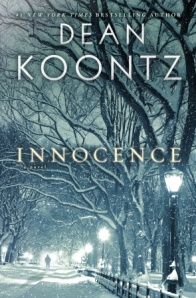